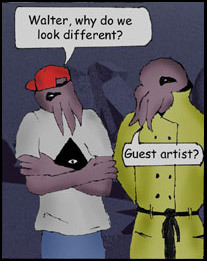 A Guest Strip is a episode of a webcomic that was not drawn or written by the current authors of said webcomic. Due to the communal nature of the Web and webcomics culture, this is much easier to organise than in other media. It is, perhaps, ascended Fan Art.

Usually, guest strips are Non-Canon and posted as Filler Strips. Entire "Guest Strip Weeks" are often invoked by webcomic authors when they need back surgery, a week in Tahiti, an opportunity to deal with familial issues, or a chance to attend a Con. Other comics, usually dailies, post a guest strip on Sundays in lieu of an elaborate Sunday Strip.

Nearly all webcomics have done this at some point; it's something of a Necessary Weasel.