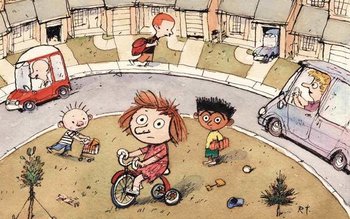 A Mundane Fantastic Newspaper Comic set in suburbia, chronicling the adventures of Alice Otterloop, a child in preschool; her brother, Petey, a neurotic and absurdly Picky Eater; and their family, friends and neighbors.

It began in 2004 as a Sunday Strip in the Washington Post Magazine. The setting was explicitly somewhere in suburban DC, but after going to nation-wide syndication in September of 2007, the setting changed to a more generic suburb, though there are still references to the original setting. The strip ended in 2012 after the author, Richard Thompsonnote Not that one, decided to concentrate on managing his case of Parkinson's disease. Thompson died on July 27, 2016 from complications related to the disease.

Has nothing to do with the Roman Polański film.

Now has its own Character Sheet. Not to be confused with an infamous fan theory regarding Ed, Edd n Eddy, which can be found here.