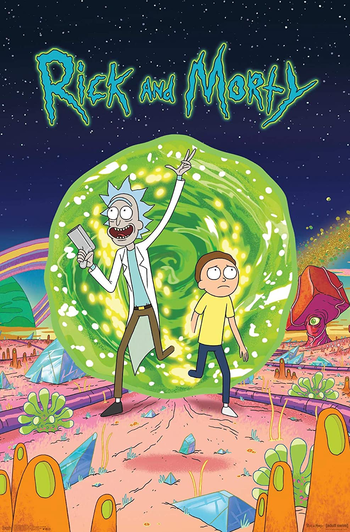 We got our own *urp* trope page, Morty!
"I wanted you to have a normal life. That's something that you can't have when Rick shows up. Everything real turns fake, everything right is wrong, all you know is that you know nothing and he knows everything. And, well... well, he's not a villain, Summer, but he shouldn't be your hero. He's more like a demon or a super fucked up god."
— Morty, "The Rickshank Rickdemption"
Advertisement:

Rick and Morty is an animated science fiction comedy series created by Justin Roiland and Dan Harmon for Cartoon Network's late-night programming block Adult Swim. Originally, the series was based on Channel101's The Real Animated Adventures of Doc and Mharti, a Back to the Future parody.

This bizarre series centers around the misadventures of Morty Smith, a kind-hearted yet troubled young high school student, and Rick Sanchez, Morty's snarky, morally-unsound and alcoholic Mad Scientist grandfather (both voiced by Justin Roiland). Rick constantly pulls Morty and his family out of their normal lives to go on sci-fi acid trip adventures across the multiverse and help him carry out insane science experiments. Morty's parents think of Rick as a negative influence on their son, but they keep Rick around the house anyway just as long as he sort of keeps Morty in school.

In May 2018, after months of contract negotiations following the end of the show's third season (and fears of cancellation), the series was announced as being renewed for an unprecedented 70 additional episodes

For episode-specific summaries and tropes, check out the recap page.

For other works based on the show, see the Franchise page.

open/close all folders
A-D
E-L
"A Mexican armada shows up. With weapons made from Two—tomatoes. And you better bet your bottom dollar that these two brothers know how to handle business. In: Alien Invasion Tomato Monster Mexican Armada Brothers, Who Are Just Regular Brothers, Running In a van from an Asteroid and All Sorts of Things THE MOVIE!"
M-P
R-U
V-Z
Morty: Jeez Rick, I, uh, I'm not sure our own trope page is the best idea for the, uh, situation...
Rick: Oh yeah Morty? Wha- What are you trying to say, Morty? You saying what you do on the internet is a more productive use of your time than TV Tropes? Y-You're saying you have better things to do than painstakingly cataloging every trivial storytelling device in every form of fiction ever as a means of studying and analyzing fiction as an entertainment medium? Is that what you're trying to say, Morty?
Morty: N-No, I just-
Rick: Well t-*URP* too bad because you'd probably be right.
Feedback

Example of:
Touch of Death