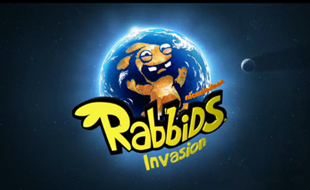 Oh great, they're in our TV for real this time!
Advertisement:

Rabbids Invasion is a 2013 animated series based on the Raving Rabbids video game franchise. It is developed by Ubisoft Motion Pictures and co-produced by France Télévisions and the French CNC. For the first three seasons, Nickelodeon provided financial support. A fourth season premiered on Netflix on July 1, 2019.

The cartoon just follows a Three Shorts format featuring random, slapstick adventures of the Rabbids as they interact with humans and cause general mischief amongst them and themselves.

The show has the following tropes