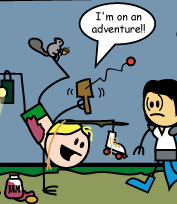 Well, you're definitely on your way to the hospital.
Mac: Guys, why aren't the brakes working?!
Charlie: Because I cut the brakes! Wild card, bitches! YEEEEEEEEHHHAAAAWWWW!!! [leaps from van]
— It's Always Sunny in Philadelphia

This sort of person will prove their chaotic nature by going out of their way to break any sort of rule or expectation of them. They'll steal for no reason other than because they don't follow the law, talk in Word Salad because they can, or go around slapping royalty in the face with rubber chickens to see the looks on their faces. While their antics might be meant to be funny, too much wacky hijinks will eventually get on everyone's nerves, and the Chaotic Stupid character's absolute refusal to take the logical action will often make them a serious liability to their compatriots. It's like they have a case of Chronic Backstabbing Disorder, but they're just as likely to pull down your pants or set whoopee cushions under your chair as they are to sell you out or kill you.

In the realm of role-playing games, this often overlaps with The Loonie, a player archetype from the famed “Munchkin File.” (In theory, the difference is that the player is The Loonie, while their character is Chaotic Stupid. However, the distinction can be hard to draw.) But it can be an annoying kind of play style, and several players’ handbooks have attempted to disabuse clueless players of the notion that chaos is a blank check to loosen their screws; even if a character is canonically chaotic, they are still more likely to choose to cross a bridge than to jump off it. Nonetheless, if you get into said role-playing games prepare to meet these people in abundance. There seems to be one per group at least; God forbid all of them are.

Often an underlying reason to Attack! Attack! Attack! and Leeroy Jenkins. Compare Too Dumb to Live, It Amused Me. For what happens when other alignments are played to a degree it becomes stupid, see Stupid Good, Lawful Stupid, Stupid Evil, and Stupid Neutral.