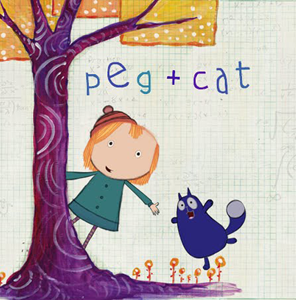 Peg + Cat (pronounced Peg Plus Cat) features a young girl named Peg along with her feline companion named Cat. Together, they explore numerous colorful settings and introduce children to basic math concepts with music, with two shorts per half-hour episode. The show made its PBS Kids debut on October 7, 2013.

They sing the title six times.

They sing the title six times.