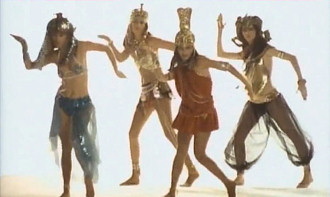 They walk the line like Egyptians.
"Slide your feet up the street, bend your back
Shift your arm, then you pull it back
Life's hard, you know (oh whey oh)
So strike a pose on a Cadillac"
— The Bangles, "Walk Like an Egyptian"
Advertisement:

A stance or style of walking meant to resemble ancient Egyptian murals. Common in animation (especially as it's hard to twist your limbs this way in Real Life), often in Knife Outline scenes.

It should be noted that real ancient Egyptians did not walk like this, it was only a centuries-long artistic style meant to show a person's body from several angles at once.