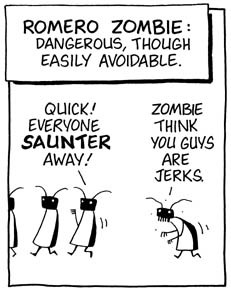 ♫ Walk this way, stalk this way... ♫
"How many times have I told you? Dead things don't move fast. You're a corpse, for Christ's sake! If you run that fast your ankles are going to snap off."
— Jason Creed, Diary of the Dead.
Advertisement:

Zombies usually shuffle around with both arms out in front of them, groaning "Braaaaaains" or something similar.note The groan depends on the zombie; vegetarian zombies usually say "graaaaaains", for instance, while zombie plumbers say "draaaaaains", zombie jockeys say "reeeeeeins" (or lots of hideous laughter, depending on the species) theoretical physicist zombies say "braaaaaanes", masochist zombies say "paaaaaains", and vampire zombies, though rare, are known to say "veeeeeeins". It's normally brains, though. Or Cerveeaauuuux. Aside from the groaning, this is not unique to zombies. Mummies usually do this as well, and even Frankenstein's Monster has been seen to lurch in this variety of the Unflinching Walk.

Although often portrayed this way in fiction (in fact, it was a fictitious sleepwalker who made this trope), sleepwalkers do not walk like this. They walk with their eyes open. If they did not, they would wake up with a nasty headache, or in the hall after they smack their heads on the nearest sharp corner. There have been accounts of sleepwalkers having held conversations, and sleepwalkers who do chores, get dressed, eat, have sex (an actual diagnosed condition, called "sexsomnia", often mistaken for rape) and people have even been known to drive their cars for miles while sleepwalking. More ominously, some occasions of accidental death and even murder have been proven to have been committed while sleepwalking.

However, Night terrors (aka pavor nocturnus) add some features of traditional zombies to the mix, as a sufferer may suddenly bolt upright, wander clumsily and aimlessly while sobbing, murmuring or screaming incomprehensible words, and on occasion will violently lash out at anyone trying to stop them.

It has been speculated that holding out one's arms pointing forward while doing the Zombie Gait derives from the mysticism connected with hypnotism in the past and the fact that to get a person's arm to rise as if without their moving it themselves is one of the easiest suggestions to perform.

This is probably somewhat counter-productive, as moving slowly and announcing your presence is a brilliant way to scare off potential prey. (Although, if a Zombie virus needs a bite or scratch to infect, the best way to transmit that virus is to attract a mob of zombies from all directions. This does not apply to non-virus zombies or omnirevenant zombies however.)

Then again, may be justified as the undead's damaged muscles might make basic locomotion a chore. George A. Romero in a 2008 interview

indicates his reasoning for why zombies are slow and cannot run. On top of that, since zombies can shrug off most things that would incapacitate a normal person and there's so damn many of them that even slow ones can be quite a threat to our plucky heroes (unless, of course, they have Bottomless Magazines).

Nevertheless, these zombies can often jump at protagonists from Behind the Black in a Deadly Lunge. See also and compare Marionette Motion, where a human body (shaped object) moves as if it were a puppet on a string. Similar in character but different in style is the hopping locomotion associated with Chinese Vampires.

The Big Cutout Soldiers walk like zombies with their arms held out.

The Big Cutout Soldiers walk like zombies with their arms held out.