Video Game / The Pinball of the Dead 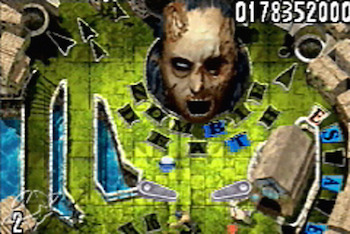 The Pinball of the Dead is a Pinball Spin-Off from Sega's House of the Dead series of zombie light-gun games. It was developed by Sega and released by THQ for the Gameboy Advance in 2002.

The goal for each table is roughly the same — destroy the hordes of zombies wandering around the playfield to enable various features, then activate them to confront the two Bosses of each table. "Free Play" allows the player to choose a table to play, while "Challenge" goes through all three boards in a distilled adaptation of the first two House of the Dead games. Digitized voices and video clips add to the immersion, and it even allows saving games in progress either to the cartridge or via a password.

As a pinball game, The Pinball of the Dead is rather sketchy, with floaty physics and some obviously canned ball physics; a bigger problem is the lack of depth, as the game is not too taxing, and all of tis gameplay elements are revealed after a few plays. As an action game, however, it's a campy way to revisit the House of the Dead universe with a fast and uncomplicated diversion.

The Pinball of the Dead demonstrates the following tropes: