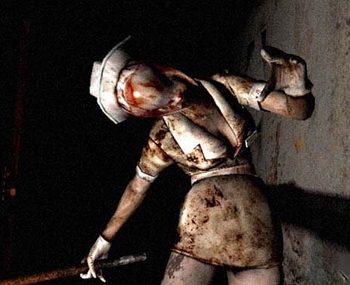 This is when a robot, Clockwork Creature, golem, undead, mind-controlled or other human-sized and -shaped entity moves as if it were a puppet on a string. In the process, it defies the laws of anatomy and gravity by bending in unnatural ways and floating... all without strings. Alternately, it might move like a broken animatronic robot, as if its insides had less articulation than a 3-inch G.I. Joe figure.

Usually used for horror stories because it is just (un)naturally creepy. To accentuate the eerie motion, camera tricks like jitters, Slow Motion and speeding up may be used. Ghostly Glide may also be used to suggest invisible strings suspending the figure in question.