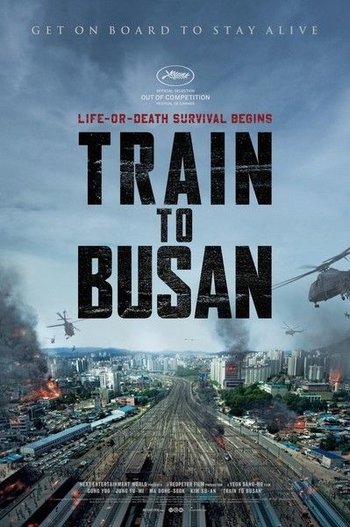 They really missed an opportunity by not calling this Seoul Train...
"I'll take you to mom no matter what."
— Seok-woo
Advertisement:

Train to Busan, otherwise known as Busanhaeng, is a South Korean zombie apocalypse thriller. The film was directed and written by Yeon Sang-ho, who is known for The King of Pigs (2011) and The Fake (2013), and stars:

Seok-woo is a busy man — busy enough that he's been recently divorced over his workaholism, and his daughter feels neglected. After missing her recital again, realizing he's bought the same exact present for her, and hearing that his daughter really wants to see her mother once again, he tries to make it up to her by reluctantly accompanying her on a KTX train (South Korea's state of the art high-speed train) ride from Seoul to Busan to visit his ex-wife.

Premiering at the 2016 Cannes Film Festival on the 13th of May, it would eventually meet critical acclaim as the first Korean film of 2016 to break a record of over 10 million theatergoers in South Korea alone, and has grossed about 88 million US$ worldwide. The animated prequel, Seoul Station, was released less than a month later.

The movie is currently optioned

for an American and a French remake; the former, titled Last Train to New York, is being produced by James Wan and directed by Timo Tjahjanto.

An Actionized Sequel called Peninsula was released in 2020.

Train to Busan provides examples of: