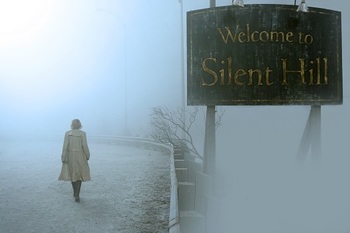 Enjoy your stay. Or die trying.
"The fear of blood tends to create fear for the flesh."
Advertisement:

Silent Hill is a video game franchise created and produced by Konami. Alongside Capcom's Resident Evil, it is considered one of the defining examples of the Survival Horror genre in the medium, being critically-acclaimed for their story, atmosphere, sound design and soundtrack.

The series surrounds the various happenings that occur in the eponymous American lakeside resort town; even before the location became known to a slew of disappearances, murders, and mysterious activity (mostly owing to the existence of at least one demon-worshipping cult), Native Americans called the area in which the town stands a cursed "land of the spirits".

Perhaps thanks to both that cult's actions and the already haunted nature of the land, Silent Hill is host to multiple "layers." Usually, it's your average Americana tourist attraction. But to select individuals, it becomes a long abandoned, desolate town that's empty of any life save for the lost and damned who stumble onto its streets. And beyond even that lies the crumbling ruin that is the Otherworld: a burning, rusty place that may as well be Hell itself.

In stark comparison to most games in the survival horror genre, the game focuses succinctly on psychological horror. Every protagonist has an internal struggle that the town itself takes hold of, altering its very environment and the creatures they'll encounter based on their psyche. The series is quite fond of Nothing Is Scarier, making use of surreal imagery and symbolism, constantly teasing the horrors that may lie in wait just out of sight.

The first four entries in the Silent Hill franchise were developed by an internal team at Konami called "Team Silent", which consisted of "outcast" staff members who had failed to work well on other projects at the studio and had planned to leave the company due to clashing with the creative vision of the studio. Work on the first game even floundered because of this, with it only progressing after Konami lost faith in the project and decided to leave the team to their own devices rather than cancel the game, thanks to the title's low budget. Team Silent would use the newfound freedom to switch tracks to a psychological horror experience inspired by director Keiichiro Toyama's interest in the occult and the works of David Lynch. Positive reception to early demos reinvigorated Konami's interest in the project, with the company giving Team Silent more money and personnel to finish the game, which would go on to be a global critical and commercial success; though director Keiichiro Toyama would leave Konami regardless to create the Siren franchise at Sony Computer Entertainment.

Following Silent Hill 4, Konami would disband the team in favor of having various Western studios develop new games in the franchise. Many of these installments, especially the spin-off entries, would see mixed critical and fan reception at best, never getting anywhere close to mass acclaim of the original tetralogy. While the last mainline game released in the series was 2012's Silent Hill: Downpour, the last major project in development was Silent Hills, which would have been a collaboration between Hideo Kojima and Guillermo del Toro. Stealth announced via a surprise trailer

unlocked at the end of a free, seemingly-unrelated horror game called P.T. in 2014, the project was cancelled after rising tensions between Kojima and Konami over the Metal Gear franchise led to him leaving the company the following year, with the publisher removing the P.T. demo from distribution for good measure. Since then, the franchise has been in limbo, with the only new content since being crossovers with other horror games; specifically Dead by Daylight in 2020 and Dark Deception in 2021.

Character sheets and a Shout Out page are up and running, so feel free to contribute.

That creep's sure to show up soon.

"The lock is jammed, this door can't be opened."