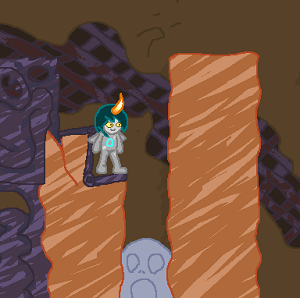 Cute and adorable.
... the fuck just happened? The fuck did I just do? I don't understand! Corpses... That's just scary. Pail Head?!
— Cry

A short survival horror/platformer component of Alabaster: The Doomed Session.

The brain-damaged, babyfur troll Ginneo Adarna is stuck in a gigantic hive. Searching for a game his best friend sent him using his domestic griffin, Ginneo will lose himself in his own memories and past sins.

"This game is insane and whoever made it belongs in a mental hospital."