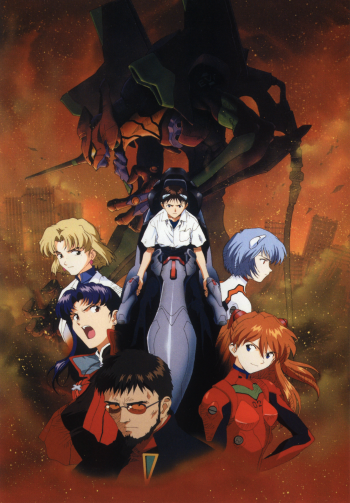 In the year 2000, a global cataclysm known as Second Impact changed the world. The event annihilated Antarctica and shifted the planet's axis, resulting in catastrophic flooding and drastically altered climates worldwide. The ensuing destruction and global refugee crisis created such extreme unrest that nuclear exchanges broke out in mere days. By the time the dust finally settled, half of Earth's human population had perished.

Fifteen years later, 14-year-old Shinji Ikari finds himself summoned to the fortress city of Tokyo-3 by his estranged father, Gendo, for a single purpose: to pilot a Humongous Mecha called an Evangelion in order to defend civilization from physics-defying monstrosities known as Angels. But can a young, damaged boy like Shinji bear the weight of humanity's survival?

What starts off as a relatively standard Humongous Mecha premise gradually transforms into a dramatic study examining the implications of its genre and themes like societal alienation, depression, and the pain of human subjectivity, surrounded by slick visual design and an air of religious mysticism. This unprecedented approach is credited with the work's runaway success and inspired a number of productions imitating the formula to varying degrees of success.

However, the series' mature content also resulted in pulled sponsorships, conflict with network censors, and a radical change in time slot (from evening to late-night, only increasing popularity among its older demographic). The production schedule and budget also became perpetual concerns as the project wore on, eventually forcing the studio to throw out their original plans for a two-part, action-packed finale. The series would instead leave the plot hanging and end with a decidedly literal (and, conveniently enough, visually conservative) summation of the work's themes: an introspection on the principal cast's respective motivations and neuroses, taking place in their own minds.

This didn't sit well with fans, partly motivating Gainax to adapt the scrapped series finale to a feature-length film. Budget was still an issue, however, and only 27 minutes of footage were completed and debuted as the second act of the Compilation Movie Neon Genesis Evangelion: Death and Rebirth, another unpopular decision with the audience. Eventually, Gainax was able to complete the rest of "Rebirth" and released the finished product four months later as The End of Evangelionnote Or Shin Seiki Evangelion Gekijouban (meaning Neon Genesis Evangelion: The Movie/Theatrical Edition) in Japanese, finally bringing the story to a definitive, if still controversial, conclusion.

Despite the numerous difficulties surrounding its production and first airing, Evangelion became a massive surprise hit that would go on to both revolutionize and redefine TV anime as a medium for the rest of the 1990s and well into the 2000s, paving the way for a wave of original Anime First properties exploring darker and more mature themes, as well as a slew of more or less successful imitators. The show is today seen as one of the cornerstones of Japanese pop culture, comparable to the impact Star Wars had in the West, and as such, its influence still looms heavily over the anime industry to this very day. As a result, Evangelion would come to define the career of Anno, whose personal battles with depression during production directly inspired many of the show's themes. Anno has since come to fully own it, even as it grew into an enormous multimedia empire comprising a bevy of merchandise, corporate partnerships, and spinoffs which often play with the original's themes or even ignore them. In particular, the series' confusing and controversial ending (and the ending of The End of Evangelion to a slightly lesser degree) became the first instance of what would come to be known as the Gainax Ending, as the studio embraced the surrealism necessitated by budget shortages and made it a cornerstone of their later works.

Evangelion was first broadly introduced to the English-speaking audience through the Texas-based ADV Films, who released the first officially sanctioned English dub of the show on VHS between 1996 and 1998. ADV would be the main distributor of the show to the Western world for about a decade, and evidently had some greater plans for it, as they secured the license from Gainax to do a Live-Action Adaptation and were even in talks with WETA about the prospect for some time. However, said adaptation languished in Development Hell for years, and due to its increasing financial troubles in the 2000s, ADV eventually lost both the adaptation rights, leaving the live-action project dead in the water, and the distribution license to the show entirely, with their last release of the show on DVD occurring in 2008. Netflix announced in November 2018 that they had obtained exclusive streaming rights to the series globally and began streaming all 26 episodes, Evangelion: Death(True)2 (a recut of Death and Rebirth omitting what would be folded into the completed version of End), and The End of Evangelion on June 21, 2019. This version of the show is largely unchanged, but international versions feature new translations and dubs and omit all instances of "Fly Me to the Moon". However, GKIDS announced

on October 3rd, 2020 that they have the home video and theatrical rights to release Evangelion in NA in 2021, including the original 26 episodes and both movies, which would see release in 2021 sub-licensed to Shout! Factory with both dubs (albeit with the originals exclusive to the collector's editions).

See here for more information about the Evangelion franchise as a whole.

Misato: Tune in next time for more fan service!