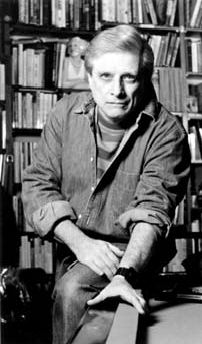 "I don't take a piss without getting paid for it!"

"Darkness falls early. From the horizon comes the wail of creatures pretending to be human. The red tide has come in, and shapeless things float toward the shore. He stands before the altar of Art, naked and with fists raised, and he vows: I will not be lied to.
Hello. My name is Harlan Ellison and I am a writer."
— Introductory paragraphs of Ellison's first An Edge In My Voice column
Advertisement:

Harlan Jay Ellison® (yes, he made his own name a registered trademark) (May 27, 1934 — June 28, 2018) was a science fiction wri— erm, that is, writer, who was strongly associated with the New Wave Science Fiction movement of the 1960s. His work has won eight and a half Hugo Awards, three Nebula Awards (plus a lifetime achievement award), five Bram Stoker Awards (including a lifetime achievement award), two Edgar Awards, and four Writers Guild of America Awards for Most Outstanding Teleplay — more awards than almost any other writer. The majority of his work was one-off short stories published in magazines and digests, often with magical realism, science fiction, fantasy and even erotic themes, often told in a surrealistic manner.

Works by Harlan Ellison include:

Ellison was grumpy. Famously grumpy. Things he was famously grumpy about include, but are certainly not limited to:

Harlan Ellison wasn't really grumpy all the time, and he did have friends, and there are also stories demonstrating that he was capable of being a wonderful human being. He also appeared as a grumpy caricature of himself in Scooby-Doo! Mystery Incorporated, giving a lecture that concluded "... and that's why nothing good has been written since the 1970s". The stories about Grumpy Harlan Ellison are a lot funnier, though (example: allegedly once mailing an executive roadkill — fourth class — along with a recipe for gopher stew).

He had numerous health difficulties including a form of Epstein-Barr that severely affected his joint mobility, a heart attack in 1996, and a stroke in 2014. He had warned fans that he was dying as early as 2010.

For an in-depth look at the man's genius, madness, and general assholery, check out the documentary on his life and career: Dreams with Sharp Teeth

. The film features commentary by Robin Williams, Neil Gaiman, Ronald D. Moore and others who have known, worked with, or have been influenced by Ellison and his writings.

Harlan Ellison died on June 28th, 2018. Friend and admirer George R. R. Martin eulogized him in a long blog post, and pointed out the Death by Irony (or aversion thereof) that for a man with such a turbulent life, Harlan peacefully passed away in his sleep and in his own bed (from a heart attack) at the old age of 84.