Recap / Doctor Who S11 E2 "Invasion of the Dinosaurs" 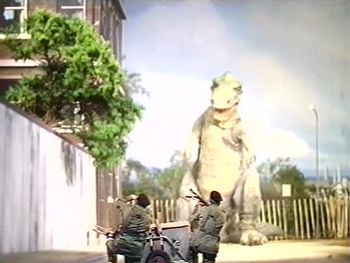 I love you, you love me... SKREEEEEEEEEEEEEEEEONK!!!
"Good grief, it's a triceratops! Look, Brigadier, try and keep it occupied while I'm finishing this off, will you?"
— The Doctor
Advertisement:

The one with the dodgy dinosaurs.

Written by Malcolm Hulke. This six-episode serial first aired from January 12 to February 16, 1974.

The Doctor brings Sarah Jane back to 20th Century London, only to find it deserted. They're soon arrested as looters and, after a very nice photo session at the police station, duly try to escape. Although their attempt to run away fails rather miserably, the Brigadier is soon handed the files of all captured criminals of the day and fixes the "typical, absolutely typical" situation as soon as he can. Back with UNIT, the Brigadier explains that the city has been evacuated due to the sudden, random and unexplained appearances of dinosaurs.

The Doctor's plan to capture a dinosaur to track the energy from its disappearance back to the source is foiled through sabotage of none other than Captain Mike Yates - who, however, doesn't want the Doctor to come to any harm.

Sarah Jane, being both smart and a reporter, manages to solve the plot before anyone else, getting kidnapped and almost murdered for her troubles... until she wakes up from an alleged "cryogenic sleep" on an eco-warrior spaceship headed for the planet "New Earth". When she tries to explain to its occupants that the nearest star is four light years away and they couldn't possibly get there within one generation, they lock her in the propaganda room to cool down. She does what any good reporter does - escapes and simply walks out of the "airlock" and up a flight of stairs to rejoin the plot back in London. The whole thing turns out to be a conspiracy led by a government minister, Charles Grover, who is using a Mad Scientist, Professor Whitaker, to clear London of people by bringing dinosaurs forward in time. They then plan to use a rudimentary time machine to return the Earth outside London to a pre-technological age, erasing most of the human race from history so that they can repopulate the planet with eugenically-selected "colonists". These are the eco-warriors, who are currently in a mocked-up spaceship in the minister's basement, believing they are on their way to colonize a new world.

To make things even more difficult for Sarah Jane and the Doctor, the head of the army controlling London, General Finch, is involved. Once the Brigadier and Sergeant Benton realize that Mike has become a Minion with an F in Evil to Grover, they allow the Doctor to escape (Benton by allowing a Venusian neck pinch and voluntarily letting the Doctor knock him out cold) and go confront the minister and his lackeys. Also, the Doctor drives Jon Pertwee's car for a bit, which is the most awesome vehicle in the universe.

The Doctor and the Brigadier raid the underground HQ of the conspiracy helped when Sarah enlightens the "colonists", who rebel. In a struggle with the Doctor over the controls of the time machine, the Doctor uses his Bizarre Alien Biology to withstand the time reversal and Reverse the Polarity. Grover accidentally transports himself and Whitaker back to the time of the dinosaurs.

The Brigadier offers Yates the chance to resign quietly. Benton revels in the fact he got a chance to punch a general in the nose, while the Doctor convinces Sarah to get back on board the TARDIS after tempting her with a trip to Florana, a place he thinks is one of the most beautiful planets in the universe. Following a futile attempt to ignore him, she merrily gives in.

Episode 1 only existed for many years as a black and white film recording. For the DVD release a colour restoration was attempted; unlike other Third Doctor stories which only survived in black and white, the result was only a partial success, and the disc includes a high quality monochrome version and a "best efforts" unrestored colour version. This is also the last serial by broadcast order to have been affected by the BBC's wiping policy before its termination in 1978; every story after this point survives via the original master tapes.