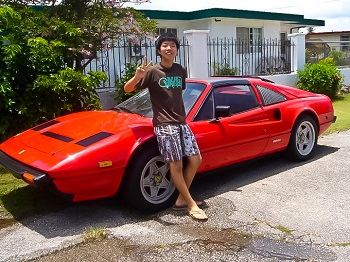 What can I say? There's some big tippers on my paper route.
"Who buys a fifty-thousand dollar car for a sixteen-year-old kid? Just who are you trying to impress!?"
— Ms. Hatzilakos, Degrassi: The Next Generation note to her ex-husband who had done exactly that.
Advertisement:

Similar to the Cool Car, but there's no logical reason for the character to have it. They don't fight crime, they're not wealthy, they've never shown a particular interest in cars or any mechanical aptitude, and yet their daily driver is something right off the showroom floor of the local Porsche dealer? How did that happen?

This trope often manifests itself one of two ways. Either it's a brand-new luxury-sports car with at least a high five-figure sticker price or it's an impeccably preserved classic car (old-school 1960's muscle cars and large convertibles are popular choices).

In many cases this can be attributed to blatant Product Placement for the former and writers choosing memorable cars from their youths for the latter.

Another variant seen mainly in high-concept youth oriented comedies from The '60s were characters who would more likely have a normal family car or old clunker driving an elaborately customized showrod (usually done by George Barris, one of the few builders of such things willing to work on Hollywood's hurry-up-and-wait schedule on a repeat basis) and inevitably available as a scale model kit from AMT or Revell (sometimes still, if the original molds survive).

This can get jarring when, despite looking awesome, the car in question will be characterized or described as a jalopy; sort of the automotive version of Hollywood Homely. This may be an attempt to connect with the Small Reference Pools of like-minded viewers who will understand that something built in Detroit 40 years ago is an "old car" while ignoring the fact that it obviously isn't suffering from the usual old car problems of body rust and worn-out parts and would be worth a small fortune to any number of collectors.

Perhaps it's unavoidable simply because any car that's both a classic and fit for filming is likely to have been restored, and the owner they rent it from probably isn't willing to have it changed or made to look like a wreck. This is especially common in a Period Piece since it's the "cool" cars from any given era that tend to get preserved or restored.

This trope is also a frequent sight in shows and films with Ordinary High-School Student characters who attend an Elaborate University High, where the use of a Cool Car for the personal transportation of a 16-year-old might just be accurate.

Compare Metallicar Syndrome, What a Piece of Junk. Contrast The Alleged Car. If the improbability of the car makes people wonder where the money came from, it can overlap with Suspicious Spending.