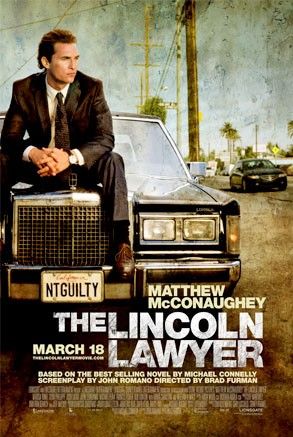 The Lincoln Lawyer is a 2005 Law Procedural novel by Michael Connelly, the first in a series featuring Mickey Haller.
Advertisement:

Mickey Haller is a comfortably Amoral Attorney, gladly defending his lawless clientele even when he knows they're guilty. He is also extremely competent, and his services command substantial fees. His trademark: the Lincoln he rides around in so that he can work while moving between Los Angeles County's many courthouses. His willingness to defend known criminals has given him a reputation, and that reputation is about to get him tangled up in some serious trouble...

Enter Louis Roulet, a rich trust fund kid accused of attempting to rape and murder a young woman he met at a bar. With his wealthy parents' money, Roulet retains Haller as a lawyer. Roulet insists that he is absolutely innocent, but the young lady tells a different story. Within a few days revelations from both sides of the case send things spiraling out of control, and Mickey Haller finds himself and his loved ones in serious danger but struggling to defend them due to the machinations of a dangerous psychopath. But perhaps the would-be mastermind has underestimated the cunning of the Lincoln Lawyer...

The Netflix series The Lincoln Lawyer is actually not an adaptation of this novel, but of the next novel in the Mickey Haller series, The Brass Verdict.

The Lincoln Lawyer provides examples of: