Film / The Fast and the Furious 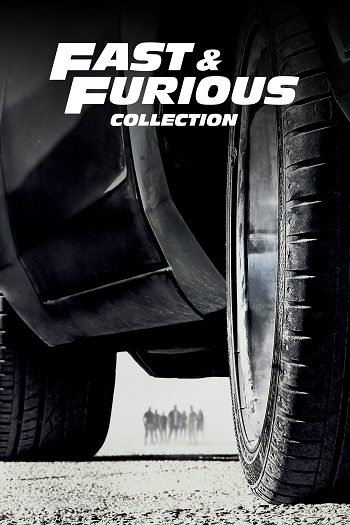 "Ride or die."
"Again the watchman reported, 'He reached them, but he is not coming back. And the driving is like the driving of Jehu the son of Nimshi; for he drives furiously.'"
— 2 Kings 9:20
Advertisement:

The Fast and the Furious, directed by John Ireland and starring Ireland and Dorothy Malone, though the fact that is one of the first films to have a feature-length Chase Scene may have had something to do with the 2001 film being given the same title.note Roger Corman, who created the outline for that film, licensed the rights to its title to Universal. According to the first film's director, the whole concept of the series was based on a magazine article about street racing.

Films
The Fast SagaThe first installment in the series follows Brian O'Conner (Paul Walker), an undercover LAPD cop, who is tasked with discovering the identities of a group of unknown automobile hijackers and underground street racers led by Dominic Toretto (Vin Diesel).

The film was directed by Rob Cohen and written by Gary Scott Thompson, Erik Bergquist, and David Ayer. It was released on June 22, 2001.Brian and his childhood friend Roman Pearce (Tyrese Gibson) team up to go undercover for the U.S. Customs Service to bring down drug lord Carter Verone (Cole Hauser) in exchange for the erasure of their criminal records.

2 Fast 2 Furious is a sequel to the first film and is the only film in the main series not to feature Diesel as Dominic. It also marks the first appearance of Gibson and Ludacris as Roman and Tej Parker, introducing them to the franchise. The film was directed by John Singleton and written by Michael Brandt and Derek Haas. It was released on June 6, 2003.High school car enthusiast Sean Boswell (Lucas Black) is sent to live in Tokyo with his father, and finds solace in the city's drifting community.

Tokyo Drift is a sequel to the previous films. Diesel makes a cameo appearance as Dominic at the end of the film. It also marks the first appearance of Sung Kang as Han Lue in the franchise (though he'd previously appeared in a previous Justin Lin film, Better Luck Tomorrow). Although this is the third film released in the franchise, it has been retroactively placed as the sixth, with the subsequent three installments being set between 2 Fast 2 Furious and Tokyo Drift. The film was directed by Lin and written by Chris Morgan, and was released on June 16, 2006.After his girlfriend Letty Ortiz (Michelle Rodriguez) is murdered, fugitive Dominic returns to Los Angeles and teams up with Brian, now an FBI agent, to avenge the murder of Letty and apprehend Arturo Braga (John Ortiz), a Mexican drug lord, crime lord and heroin importer.

This film is set five years after the events of The Fast and the Furious, a sequel to 2 Fast 2 Furious, and canonically long before Tokyo Drift, as it features Kang as Han, wanting to travel to Tokyo in the future. It features the return of the original main cast (Diesel, Walker, Rodriguez and Jordana Brewster, who portrays Dominic's sister Mia). The film was again directed by Lin and written by Morgan. It was released on April 3, 2009.Dom, Brian (now an ex-FBI agent-turned-criminal), and Mia plan a heist to steal $100 million from Hernan Reyes (Joaquim De Almeida), a corrupt, evil Brazilian drug lord and crime lord who owns and runs the city of Rio de Janeiro to secure their freedom and topple his criminal empire while being doggedly pursued for arrest by a dangerously lethal U.S. Diplomatic Security Service (DSS) lawman federal agent Luke Hobbs (Dwayne Johnson).

The film continues directly from the end of Fast & Furious, introducing Johnson and Elsa Pataky as Hobbs and Elena Neves, respectively. It also features the returns of Gibson and Ludacris as Roman and Tej from 2 Fast 2 Furious; Kang as Han from Tokyo Drift and Fast & Furious; and Gal Gadot, Tego Calderón and Don Omar as Gisele Yashar, Tego Leo and Rico Santos, respectively, from Fast & Furious. Eva Mendes also makes an uncredited appearance as Monica Fuentes in a mid-credits scene, reprising her role from 2 Fast 2 Furious.

Fast Five deliberately departed from the street racing theme prevalent in previous films, to transform the franchise into a heist action series involving cars. The film was directed by Lin and written by Morgan. It was released on April 29, 2011.Hobbs recruits Dom, Brian, and their team to help him defeat Owen Shaw (Luke Evans) and his skilled mercenary organization, promising to grant them full pardons for their crimes so they can return home to Los Angeles; Dom discovers that his supposedly deceased girlfriend Letty is still alive (albeit rather amnesiac) and working for Shaw.

It is the last film to be set before Tokyo Drift. In a mid-credits scene, Han's death scene from Tokyo Drift is replayed, with an added scene showing that his killer is Owen's older brother Deckard, portrayed by Jason Statham. Ortiz reprises his role as Braga from Fast & Furious, while Gadot makes her final appearance as Gisele in the series. Fast & Furious 6 incorporates elements of spy and adventure film to the franchise. The film was directed by Lin and written by Morgan. It was released on May 24, 2013.After defeating Owen Shaw and his henchmen, Dom, Brian, and the rest of the team are eerily hunted down by his vindictively vengeful older brother Deckard, a rogue British special forces assassin seeking to avenge Owen by plotting to murder them all after killing Han in Tokyo and blowing up Dom's L.A. mansion using a letter bomb. The team allies with a Fed called Mr. Nobody (Kurt Russell) to rescue a hacker, Ramsey (Nathalie Emmanuel), from a Nigerian terrorist, Mose Jakande (Djimon Hounsou).

The film is set after the events of Fast & Furious 6 and Tokyo Drift. It features the return of Lucas Black as Sean Boswell from the latter film, after nine years.

Furious 7 also marks the final film appearance of Walker, who died in a single-vehicle crash on November 30, 2013, with filming only half-completed. Following his death, filming was delayed for script rewrites and his brothers, Caleb and Cody Walker, were used as body doubles (stand-ins) to complete his remaining scenes. John Brotherton also was a minor stand-in for Walker. These script rewrites completed the story arc for Walker's character, who was subsequently retired. The film is dedicated to him. It was directed by James Wan and written by Morgan, and was released on April 3, 2015.With Dom and Letty on their honeymoon, while Brian and Mia having retired and the rest of the crew having returned to seemingly normal, peaceful lives, a sinister cyberterrorist named Cipher (Charlize Theron) seduces Dom to the dark side and coerces him to join her and betray his team, using his baby son as leverage, forcing the rest of the team to rescue Dom and take down Cipher.

The film is set after Furious 7. It is the first film since Tokyo Drift to not feature Walker and Brewster as Brian and Mia. The film also marks the final appearance of Pataky as Elena in the series. The Fate of the Furious was directed by F. Gary Gray and written by Morgan. It was released on April 14, 2017.A few years after the events of The Fate of the Furious, Dom and his family must come out of retirement after they are dangerously hunted down and targeted by a deadly assassin at the behest of Cipher: Dominic's forsaken younger brother Jakob (John Cena), who also has a personal vendetta against him.

The film features the return of Kang to the franchise, with his character Han revealed to be alive. Also returning are Brewster as Mia and Black as Sean, as well as Bow Wow and Jason Tobin, who reprise their Tokyo Drift roles as Twinkie and Earl respectively. This is the first film since Fast Five not to feature Johnson as Hobbs, while Statham only makes a cameo as Deckard in the mid-credits scene.

Lin returned as director after not directing the previous two installments, while the film was written by Daniel Casey, marking the first time since 2 Fast 2 Furious that a film was not written or co-written by Morgan. Originally scheduled to be released on May 22, 2020, F9 was pushed back to June 25, 2021 as a result of the COVID-19 Pandemic, though it did launch overseas earlier on May 19 that year.A tenth installment will be directed by Lin and written by Casey. It was scheduled to be released on April 2, 2021 before the COVID-19 pandemic hit, delaying filming until 2022. F9 originally took its release date until it was delayed again for two months. It is currently slated for a May 19, 2023 release. Jason Momoa, Daniela Melchior, and Brie Larson will join Diesel, Gibson, Ludacris, Rodriguez, and Kang, all of whom have been confirmed to reprise their roles.An untitled eleventh film has been confirmed to be the final mainline theatrical entry in the series, with Lin in talks to direct yet again.

Hobbs and Shaw are forced to team up with Shaw's sister Hattie (Vanessa Kirby), an MI6 agent, to battle a cybernetically-enhanced terrorist named Brixton Lore (Idris Elba) who is threatening the world with a deadly virus.

The film is set after the events of The Fate of the Furious. Helen Mirren reprises her uncredited role from that film as Magdalene Shaw, Deckard and Hattie's mother. Hobbs & Shaw was directed by David Leitch and written by Morgan and Drew Pearce. It was released on August 2, 2019.

There is at least one female-lead spinoff in development. An untitled film focusing on female characters was first announced by Diesel in January 2019, with writers already on board. In June 2021, Diesel announced that a spinoff focusing on Cipher is also in development. It is unknown whether these projects are distinct or one and the same.

An untitled sequel to Hobbs & Shaw was announced to be in development in March 2020, with Johnson back on the saddle as producer and lead actor, and Morgan returning as writer.

Example of:
Crazy Enough to Work