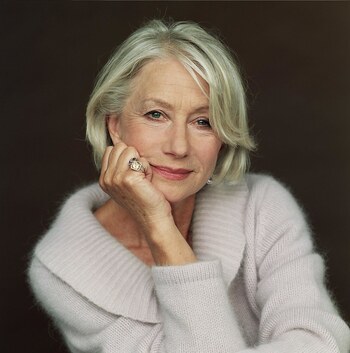 "Actors are rogues and vagabonds. Or they ought to be."
Advertisement:

She is known for, among other things, not being shy to shuck her clothes. Like Kate Winslet, she favors characters that are bold and ballsy - much like Mirren herself. Her most famous role to date is the Emmy award-winning DCI Jane Tennison in the long-running, critically acclaimed TV series Prime Suspect.

She is also noted for her exquisite taste in clothes. Everyone forgets this for most of the year, so come awards season the media has a collective asthma attack at how gorgeous her dresses are. Then they do it all again the next year.

She is the only actress in history to have portrayed both Queens Elizabeth - Elizabeth I in the miniseries Elizabeth I, Elizabeth II in The Queen and in the play The Audience. She won an Emmy for the former and an Oscar and a Tony Award for the latter, surprising absolutely nobody. She only needs one Grammy Award to complete her own EGOT (Even though she clearly can't sing, she can win one for this

She is one of the grandes dames of the English stage, alongside Judi Dench, Maggie Smith, and Emma Thompson. Like many of her British cohorts, Mirren put in a stint at the Royal Shakespeare Company.

She is of Russian descent; her grandfather was a Tsarist aristocrat who was stranded in London after the Bolshevik Revolution. Her birth name is Helen Lydia Mironoff, which her father anglicised to Mirren in the 1950s. While she does not speak Russian, she is fluent in French. Tania Mallet, who played Tilly Masterson in Goldfinger, was her cousin.

She can definitely be seen as attractive even in her golden years. In 2010's Love Ranch, she became the first major actor to appear nude on film in six different decades (and did a nude-in-the-bathtub photo shoot in New Yorker magazine alongside the film. At age 65!).

She has been married to American director Taylor Hackford since 1997.

Her more important roles include: