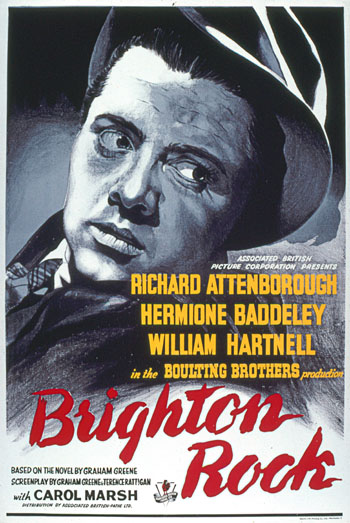 The (First) Film of the Book
Advertisement:

One of Graham Greene's better-known novels, Brighton Rock (1938) is set in 1930s Brighton, and describes the fall of Pinkie Brown, a 17-year-old boy who takes charge of a mob. After murdering a newspaper reporter, Fred Hale, Pinkie thinks he has successfully got away with it — until a woman who had been with Hale on the day, Ida Arnold, decides to pursue him for the crime he has committed. He is increasingly driven toward desperate means, further murders and eventually attempting to kill his newlywed wife and himself. He is successful only at the latter.

The novel deals with numerous themes, including the nature of morality, and comes from a strongly Roman Catholic perspective — largely owing to it being the writer's religion. It has also been adapted twice into film — once in 1947, and once in 2010, which gave it a shift in period to the mods-and-rockers era.