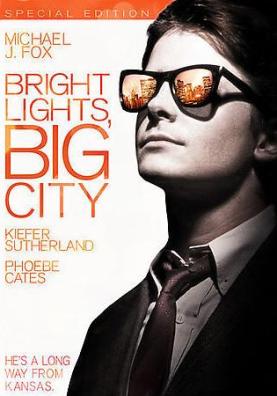 Note the DVD cover's rather gratuitous reference to that Kansas trope.
"There's a certain shabby nobility in failing all by myself."
— Jamie Conway
Advertisement:

Bright Lights, Big City is a 1988 drama film directed by James Bridges and starring Michael J. Fox. It was adapted from the eponymous novel by Jay McInerney, who also wrote the film's screenplay.

Jamie Conway is a man in free fall. Once upon a time he arrived in New York with dreams of literary success, but he has found himself stuck in an unrewarding job as a fact-checker for a literary magazine, his wife has left him to embrace a career as an international model, his mother has died, and his twin cocaine and alcohol habits are wrecking his life. The narrative follows him in the course of a week or so, as he careens towards rock bottom.

The film, like the novel, is a nonjudgemental but candid depiction of the drug-fueled lifestyle of 1980s New York yuppies.