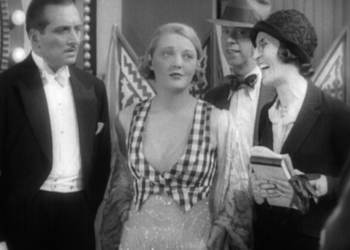 Bright Lights is a 1930 film directed by Michael Curtiz.

Louanne (Dorothy Mackaill) is the star of a musical revue show titled Bright Lights. She is about to play her last show, as she is leaving the stage to marry a starchy aristocrat named Fairchild. Her costar and longtime showbiz partner, Wally, is clearly in love with her himself but is putting up a brave facade. Another plot line follows Connie (James Murray, The Crowd), a bootlegger who is trying to branch out into more legitimate (or at least less dangerous) businesses by partnering up with a Portuguese smuggler, Miguel Parada...who as it turns out has a past with Louanne.

Bright Lights was filmed in color but only a black-and-white print exists, except for a 3-minute fragment that is not included in the current public print. John Carradine made his film debut in an uncredited bit part, as a photographer at Louanne's press conference.