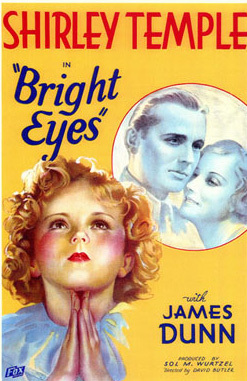 Bright Eyes is a 1934 film directed by David Butler and starring Shirley Temple. Temple, who was six years old when this film was made, plays Shirley Blake, the daughter of a commercial air pilot who was killed in a crash. Shirley spends most of her time hanging out at the Glendale, California airport, where her godfather, James "Loop" Merritt, still works as a pilot. Shirley's mother Mary works as a maid for the mean-spirited Smythe family. Anita and J. Wellington Smythe don't like Loop coming to visit Mary and little Shirley, but their uncle Ned, the family patriarch (who still spells his name "Smith"), takes a shine to Shirley and prefers her to Anita and J. Wellington's bratty daughter, Joy.

Shirley is orphaned when her mother is killed in a traffic accident. The Smythes want to get rid of her, and Loop wants to take custody of her, but after Uncle Ned insists on keeping Shirley, a custody battle develops.

Bright Eyes features as its one musical number Temple's Signature Song, "On the Good Ship Lollipop". It was the first film made especially for Temple and made her a huge star—in fact, she would soon become the biggest box-office draw in Hollywood and would remain so for the rest of the decade. Interestingly, it was also the Star-Making Role for Jane Withers who played Spoiled Brat Joy Smythe, and went on to her own series of children's movies in which she played girls who weren't quite as sugary sweet as Temple.