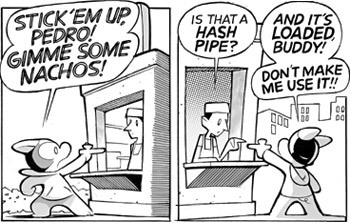 The act of threatening someone with a weapon you do not have, or telling others to back off or you will use a hidden weapon when no such weapon exists. A few variants of this trope include:

Please note that this trope is for instances when someone is pretending that they have a weapon, so if they are threatening to use something that is completely recognizable as a weapon (be it empty, an antique, or even a fake or toy that looks extremely realistic), then it's Weapon for Intimidation.

Also note that doing this trope in real life is a felony offense: Threatening with a weapon, even a non-existent one, is considered Aggravated Assault. Do Not Try This at Home.

Super-Trope of Stick 'em Up, for when this trope is used in conjunction with the element of surprise and a sharp poke in the back.

See also Finger Gun, He's Got a Weapon! and Shoot Him! He Has a... Wallet.

Sometimes, it turns out that the bluff isn't that much of a bluff: see This Banana is Armed, Improvised Weapon and Improbable Weapon User.