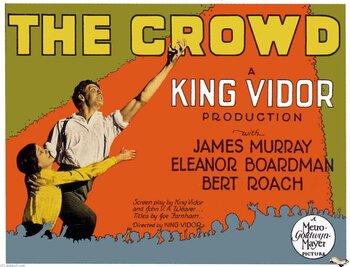 "The crowd laughs with you always—but it will cry with you only for a day."
Advertisement:

One of the most daring, groundbreaking films to be made in The Silent Age of Hollywood—or ever, possibly.

Directed and co-written by one of the greatest filmmakers of the era, King Vidor, The Crowd (1928) stars James Murray as John Sims, an ordinary young man who is blissfully confident that he'll be a great success when he comes to the big city. The only problem is that John is a dreamer who believes he can win that success through shortcuts, like thinking up corny advertising slogans or hitting on some big idea, rather than by actually working hard or applying himself. Eleanor Boardman plays John's loving, supportive wife Mary.

A horrible tragedy destroys John and sends him into a downward spiral. As his life slides out of control, he sees how "the crowd laughs with you always... but it will cry with you for only a day."

The Crowd was recognized as brilliant at the time, earning nominations at the first Academy Award ceremony for Best Director and Unique and Artistic Production (the latter being an alternate Best Picture award that was never given again). The years have not lessened its critical standing. In 1989 it was one of the first 25 films selected by the Library of Congress for inclusion in the National Film Registry.

In 1934 Vidor made a sequel, Our Daily Bread, with different actors playing John and Mary Sims.

The Crowd provides examples of: