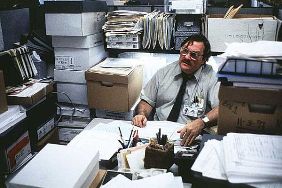 I believe you have my stapler...
"Working nine to five, what a way to make a living."
— Dolly Parton
Advertisement:

As office machinery such as the typewriter, adding machine, mimeograph etc. became available starting in the latter half of the Nineteenth Century, clerical workers began shifting their skill sets from the Clerk to the modern White Collar Worker. In particular, many women joined the workforce, though they tended to be stuck in the lower-ranked and lower-paying "pink collar" office jobs. Women's roles in the office both in real life and media have improved over the decades.

The White Collar Worker is a staple of the Work Com, but can be found in any work of fiction that requires office scenes. The natural habitat of the White Collar Worker is the office cubicle. Their natural enemies include bosses of all kinds except "benevolent" and their more obnoxious co-workers. As for their work...well, white collar jobs are kind of boring to look at most of the time, and one set of paperwork looks much like another. So the details of the work are usually not examined closely. Indeed, often the exact position or job description of the characters will deliberately be left vague. This gives greater plot flexibility, especially when the Pointy-Haired Boss decides to give the hero some wacky project that would seem to have little to do with the job, normally.