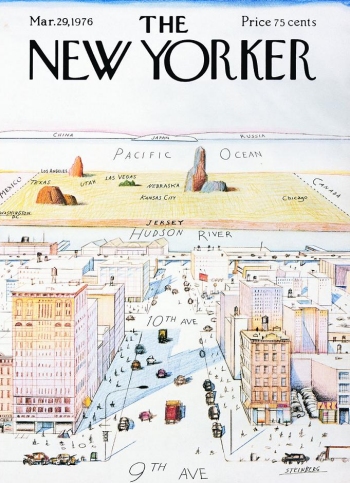 New York City seems to get all the attention in American fiction.

Is an Alien Invasion in progress? Watch for UFOs landing in Queens. Is there a neighborhood full of world-class martial artists with superhuman powers? It's in Brooklyn. Ultimate Showdown of Ultimate Destiny? Madison Square Garden's got your front-row seats. A magical gateway between worlds? Look in the Queens Midtown Tunnel, or perhaps Central Park. Looking for The Leader of a secret den of werewolves? He's probably chowing down on a burger at the Times Square McDonald's. Is there a mysterious gigantic cavern hidden just beneath the Earth's surface, wherein the Precursors created all life on Earth? Check in the Queens Midtown Tunnel again. Has The Plague or a Zombie Apocalypse broken out? The epicenter is in Harlem. And, of course, beware the Mage in Manhattan.

The rule seems to be that if a series or movie proposal does not require another setting (Kirk's Rock, for instance), it should be set in New York. If an original, successful series is set in Las Vegas, its Spin-Off will be more successful if set in New York. If you can't possibly get the show to happen in New York, have at least one main character (and as many minor ones as possible) be from New York, and continually harp on about how much better New York is than wherever the setting takes place.

In other words, everything is better with a side helping of Big Applesauce. Unless Tokyo Is the Center of the Universe.

At the very least, New York is where a great many writers live, or come from (either there or Los Angeles), which makes it more interesting to the writers than anything elsewhere. Not to mention easier for them to write about convincingly.

The bias is especially obvious when characters speak about specific parts of New York casually (everybody in the world knows which subway train you have to take to get to 115th street, right?), while the entirety of Middle America usually consists of about ten distinct places, or when any group of people naturally includes a Jewish person, because isn't one eighth of the population everywhere Jewish?

There is a reason for this: the skyline is just so darn recognizable. In addition, New York City is the most populous metropolitan area in the United States (and among the most populous in the world), possibly justifying the frequency with which events of great significance occur there in fiction. Further justification for this is New York's diversity. Very close to every single ethnic, racial and religious group is represented to some degree or another on the streets of the five boroughs, and nearly every language spoken on Planet Earth can be heard there. Although most US cities are cosmopolitan to one degree or another, New York is particularly noticeable due to the larger population, thus making the diversity more obvious - and the white people alone are remarkably diverse in themselves, unlike in most other American cities where they're relatively homogeneous, so it's possible to fall back on Monochrome Casting and still feature many unique characters. Further helping matters is the fact that New York is a major hub for business, finance, politics, culture, etc., which makes it that much easier to set stories of all sorts there.

It is worth pointing out a lot of NYC streets aren't actually filmed there; more than one California studio (and some other studios outside the US) has a dedicated NYC backlot.

Compare Fulton Street Folly, the localized version where everything inexplicably happens in Lower Manhattan because it's relatively easy to film there, and New York Is Only Manhattan, which describes the tendency to ignore the Outer Boroughs in fiction, let alone the rest of New York State. Indeed, outsiders who are aware New York is also a state are often surprised that an obscure place such as Albany note "Where's Albany?" is the state capital; people tend to assume the state of New York is governed from the city of New York. See also Tokyo Is the Center of the Universe for Anime and Japanese TV, Britain Is Only London for UK productions, and Hong Kong for Chinese-language equivalents. If the writers pick someplace off the beaten path instead, you've got Aliens in Cardiff. Cities suspiciously like New York even turn up in fantasy and sci-fi worlds.

If a story depicts New York as an unlivable hellish Wretched Hive (and is usually set during the period from the mid 1960s through the early 1990s), the sub-trope of Big Applesauce, The Big Rotten Apple, comes into play. See also Brooklyn Rage.

If a story is set in a Big East-Coast Metropolis but is deliberately cagey about whether it's New York or Toronto, that's Canada Does Not Exist.

Arlo and his friends reach New York City where his birth dad resides, and explore together.

Arlo and his friends reach New York City where his birth dad resides, and explore together.