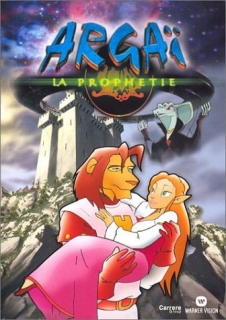 Argai: The Prophecy (Original title: Argaï: La Prophétie) is a 26-episode French animated series created in 2000, in which all characters are anthropomorphized.

Year 2075. The evil Dark Queen Orial is ruling with an iron fist in what is a Crapsack World, from her levitating base located on top of New York City. She's immortal, as throughout time, she has stolen the youth of several maidens, and keeps them in eternal sleep to maintain the effects of her immortality. But back in 1250, she stole the youth of sweet and beautiful Angèle, who happens to be the fiancée of Prince Argaï, the protagonist.

This guy, who's one hell of a Determinator, goes then on a journey to save his beloved, and engulfed in a lightning flash, finds himself transported to New York City in 2075. He then meets private detective Oscar Lightbulb, his assistant Barnaby and their secretary Miss Moon. They decide to help Argaï, and discover that a book of prophecies details the antidote, as well as the 13 ingredients needed to create it, that would take out Angèle of her slumber, and thus at the same time save Angèle and destroy Queen Orial. They get a hand on the book and have the wise move of making a copy of it by scanning it, before Queen Orial steals the original from them. Now starts a quest throught time to gather the antidote's ingredients, with Queen Orial knowing their every next move.

Argaï: The Prophecy provides examples of: