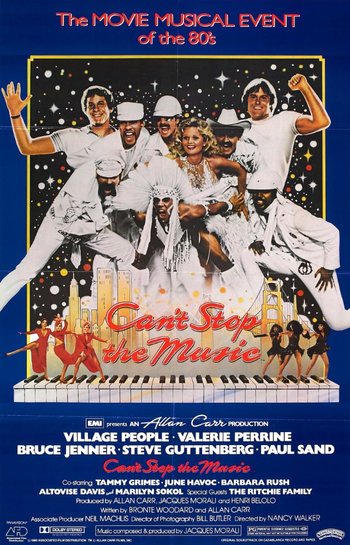 Can't Stop the Music is a 1980 American musical comedy film that is a pseudo-biography of the Village People, which bears only a vague resemblance to the actual story of the group's formation. It was directed by Nancy Walker and written by Bronte Woodard and Allan Carr.

Samantha "Sam" Simpson (Valerie Perrine), a supermodel newly retired at the peak of her success, sees the response to a song her roommate, songwriter Jack Morell (Steve Guttenberg) wrote for her and agrees to use her connections to get him a record deal. Her connection is her ex-boyfriend Steve Waits (Paul Sand), president of Marrakech Records, who is more interested in rekindling their romantic relationship than in Jack's music (and more interested in taking business calls than in wooing Samantha), but agrees to listen to a demo. Sam decides Jack's vocals are not adequate, so she recruits members of what would eventually become the Village People. Meanwhile, she meets Ron White (Caitlyn Jenner), a lawyer from St. Louis who agrees to help her with the enterprise.

Can't Stop the Music is notorious for being the first winner of the Golden Raspberry Award for Worst Picture, for it was a double feature of this and Xanadu that inspired its founder John "J. B." Wilson to start the Razzies.