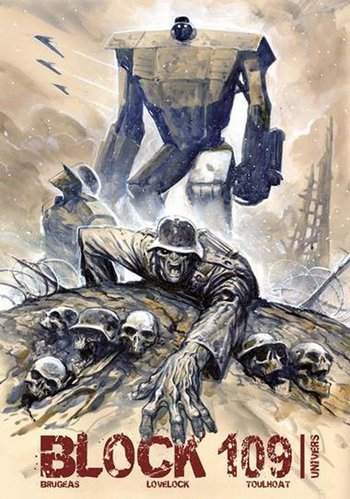 "Enter a world at war."
Advertisement:

Adolf Hitler was assassinated in 1941, Heinrich Himmler took over the chancellery, Reinhard Heydrich became Reichsführer of the SS, Berlin was rebuilt to Albert Speer's designs and renamed Germania (much like in Fatherland). The Third Reich conquered Western Europe and most of Africa, launched its "Ragnarok program" in 1942 and massively nuked the USA and the United Kingdom on May 8th 1945. Operation Barbarossa was launched in 1944 but the forces of the Soviet Union proved to be stronger than expected and ultimately repelled the German armies all the way to East Prussia. A new Teutonic Order was created (the symbol of which is a square pierced by an arrow). Himmler died in an accident in 1947 and was replaced by his right-hand, an ambitious officer named Zytek.

Zytek rejected the title of "Führer" and now calls himself the "Hochmeister" (Grand Master, which is also his rank in the Teutonic Order), and he has an agenda of his own, which reaches its final phase in 1953 just as Germans are fighting a desperate battle in the ruins of Marienburg, East Prussia.

Several large format albums followed. They're all one-shot stories set in the same universe between 1944 and 1953 (some major characters of the first album appear in them at some points):

An omnibus titled Block 109: Univers was published in 2018, regrouping all of the stories in one single book and adding some new World War II-style poster artworks. It has a preface in which Vincent Brugeas explains he was done with the series, lacking inspiration and editorial possibilities and dedicating time to other projects (such as Chaos Team and Cossacks).

Tropes present across the series: