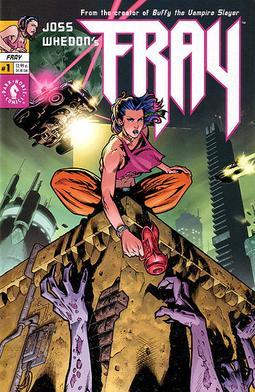 Fray, or sometimes Fray: Future Slayer, is an 8-issue Comic Book series written by Joss Whedon, with art by Karl Moline. It's a Spin-Off of the work that made Whedon famous, Buffy the Vampire Slayer.

Hundreds of years in the future, teenage cat burglar Melaka "Mel" Fray discovers that she is the Slayer, the one girl in all the world chosen to fight the vampires, demons, etc. Unfortunately, things have changed since Buffy took up the stake; the Watchers Council have gone insane waiting for the next Slayer to be called, and her only ally is the demon Urkonn, who has reasons of his own for helping her. But there's no time for doubts—the monsters are back, and someone is planning on ending the world. Again.

Not to be confused with the band The Fray.