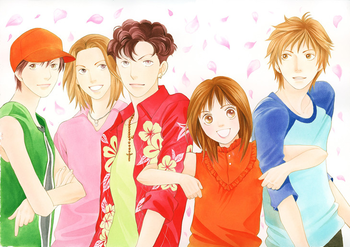 Don't be so full of it!
Advertisement:

Boys over Flowers (花より男子 Hana Yori Dango) is a Japanese Shōjo manga series written by Yoko Kamio. It ran in the shoujo magazine Margaret from 1992 to 2008, culminating in a total of 37 volumes. It has enjoyed massive popularity in Japan and Asia. It has been adapted into an anime, thirteen live-action television dramas, three of which are sequel seasons, two remakes, In order of production: Meteor Garden in Taiwan (2001); Siapa Takut Jatuh Cinta in Indonesia (2002); Meteor Garden II in Taiwan (2002); Hana Yori Dango in Japan (2005); Hana Yori Dango Returns in Japan (2007); Boys Over Flowers in South Korea (2009); Meteor Shower in Mainland China (2009); Güneşi Beklerken in Turkey (2013); Kaisi Yeh Yaariyan in India (2014); Siapa Takut Jatuh Cinta Indonesian remake (2017); Kaisi Yeh Yaariyan 3 sequel in India (2018); Meteor Garden remake in Mainland China (2018); F4 Thailand: Boys Over Flowers from Thailand (2021), an animated movie set in a parallel universe, and a live-action movie. Takarazuka Revue also put on a stage adaptation in summer 2019.

The story varies a bit from continuity to continuity, but the basics are thus: Plucky Girl Tsukushi Makino is the sole middle class student attending the Fiction 500 prep school Eitoku Academy. The school is presided over by the F4 (short for "Flower Four"), Tsukasa Domyoji, Rui Hanazawa, Sōjirō Nishikado, and Akira Mimasaka, whose parents have paid the administration a massive amount of money to grant their offspring free rein over the school. As a result, they lord themselves over the school and use their influence to get the entire student body to attack students physically for such transgressions as "accidentally squirting lemon juice into our leader's eye." For about a year and a half, Tsukushi tries to preserve her safety by being ignored, but steps in to protect her only friend at school (Shrinking Violet Makiko Endou), who accidentally offends Tsukasa, the F4's leader. This instead causes her to be assaulted and ostracized by the entire school, except for Tsukushi's crush Rui (who often steps in and saves her when he's not busy spacing out) and Tsukasa (who is more intrigued than outraged). She eventually befriends the F4, and her influence largely seems to stop their bullying ways.

The series gradually changes focus to the Love Dodecahedron surrounding the main characters, and eventually focusing on the main couple of Tsukushi and Tsukasa. The latter half is largely composed of them working around their massive class differences (his parents are Corrupt Corporate Executives, hers are increasingly insolvent) and thwarting the plans of Tsukasa's Evil Matriarch Kaede to separate them...

See also Boys Before Flowers for the Korean Series based on this manga. A sequel named Boys Over Flowers: Season 2 (Hana Nochi Hare in Japan), which stars a whole new cast two years after the original series' characters graduate from Eitoku, started in 2015 and is published in Shonen Jump+. This series also got a live-action adaptation in 2018, but changed the time window from two years to ten years.

Boys over Flowers provides examples of:

The sequel, Boys over Flowers Season 2, has the following tropes: