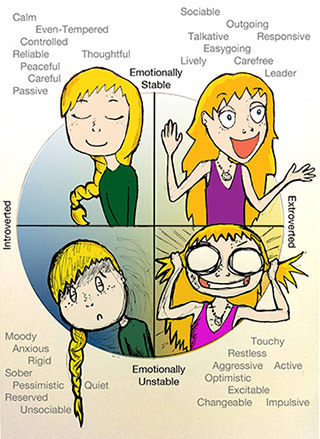 There are many ways to make a group of people diverse without giving them overly specialized roles within an ensemble. One way is through matching personality types according to an ancient proto-psychological theory. The Four Temperaments (also called the "four humors") was a theory that behavior was caused by concentrations of body fluids — the "humors" of classical medicine: blood, yellow bile, black bile, and phlegm.

A temporary imbalance would create an illness: too much blood caused a fever, too much yellow bile caused a cough, too much black bile caused depression, and too much phlegm caused a cold. A permanent imbalance led to a person having a certain type of intentions, behavior, and personality. Though this has been a theory long-since discredited from a scientific standpoint, the general idea still remains and the theory is still used for personality profiling. An ensemble based on these four humors can make the cast diverse without actually changing the roles of the characters in the story.

One of the interesting factors in the Four Temperaments, is that there is no Leader - any one of them could be The Leader in the piece and defines the approach the team takes to the problem, while in a series the focus can switch back and forth to develop characters separately - see A Day in the Limelight. Rather than meeting through coincidence or brought together in the first episode, these four are more likely to be long-term friends or family from the start. There may be a fifth person hanging around occasionally but they're not really part of the team; they just add flavour or play the part of Mentor Archetype.

Along with a list of characteristics, the four temperaments are:

The four temperament system, while interesting, was seen as flawed even back then as some people did not fit with any of the presented humors, so a neutral temperament has been used. Originally derived in modern temperament theory from the once popular FIRO-B psychometric instrument, which included moderate scales. When the temperaments were mapped to it, the traditional Phlegmatic ended up moderate in both "expressive" (classic "extrovert" and "introvert") and "responsive" (classic "people vs task" focus) scales, and the low expressive high responsive area was labeled "Supine". While it shares many common elements with the Phlegmatic, the difference is that the Phlegmatic is this way from a lower energy reserve which leads them to take the path of least resistance (to either go with the flow and be agreeable, or to be stubborn and slow), while the Supine has an emotional energy that drives them to be reserved, but wanting of acceptance from others.

In alternative versions of the theory, the Phlegmatic kept in its old place, and the new temperament, here labeled as either "leukine" (after leukocytes to match the body fluids theme) or "eclectic", was considered the moderate one, sharing traits with all of the four temperaments (both "extrovert" and "introvert" and both "people-oriented" and "task-oriented").

In fiction this has been mostly reserved either for the lead character or more commonly for secondary characters (as for Four-Philosophy Ensemble, usually the Conflicted, but can also be Realist or Apathetic).

They are similar to the four Personality Blood Types, and are sometimes also a Four-Element Ensemble.

See also Cast Calculus for the overarching archetypes in this and differently numbered ensembles. Here is an Image Archive for this trope. Additionally, Pseudolonewolf (of MARDEK fame) has a page that goes into great detail on the four temperaments, here

), Eric B has a page that explains the five temperaments here,

and The Other Wiki offers its information here.

For another way to split up a group of four, see Four-Philosophy Ensemble. If you want to write such a group, see Write a Four-Temperament Ensemble.