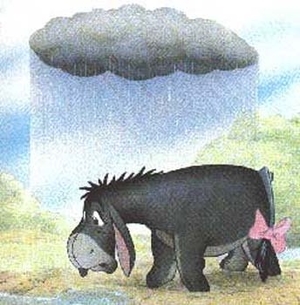 "Sorry for being on this page..."
Gamal: How's it going?
Jeriah: Not too good — still alive.
— Men in Hats
Advertisement:

This character exists solely to bring everybody down, but not in the Deadpan Snarker sense; they are defined entirely by their complete inability to be happy for more than a few seconds at a time, an emotional state that usually arises from their only occasionally justified suspicion that they are the Butt-Monkey of the entire universe. They are the walking Anthropomorphic Personification of clinical depression. However, the few moments that they are happy can be a Heartwarming Moment.

Sometimes overlaps with Sour Supporter, but not often; they are generally too unhappy to be effective or active.

When upset, the Eeyore may as well become Cute and Psycho. Being an Eeyore could easily be interchangeable with Emo when their angst comes from over-sensitivity and introspection. A stereotypical Goth will adopt such behaviour out of a more cerebral, nihilistic view of humanity. An Eeyore with artistic talent will use it to express his overwhelming angst.

If written a certain way, The Eeyore can easily become a Woobie. Some versions may be Prone to Tears, while others may just be perpetually dour. In a Four-Temperament Ensemble, this character is almost always Melancholic.

The Pollyanna is the polar opposite of this trope.

The Debbie Downer skit goes completely off the rails. And the audience is here for it!

The Debbie Downer skit goes completely off the rails. And the audience is here for it!