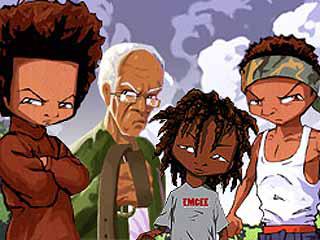 The Boondocks is a newspaper comic strip created by Aaron McGruder, which was originally published by the Universal Press Syndicate from 1999 to 2006, with an unexpected revival in 2019. All of the UPS comics can be found here

. It was adapted into an animated television series of the same name that has aired intermittently on Adult Swim since 2005.

The comics are centered around the lives of the Freemans, a black family from inner-city Chicago, Illinois who move into the mostly white suburb of Woodcrest, Maryland. The main protagonist is Huey Freeman, a smart yet cynical little boy who is a far-left-wing political activist, constantly railing against problems affecting the black community. His little brother is Riley Freeman, a juvenile delinquent who imitates gangsta rap culture too closely. The two boys are being raised by their single grandfather Robert Freeman, a grumpy old man who takes a disciplinarian approach to parenting.

Other important characters include Huey's best friend Michael Caesar, another black kid who is also a newcomer to Woodcrest. Even though he didn't appear until a year into the comics' run, Caesar quickly became a co-protagonist to Huey, and often provided additional commentary to Huey's rants. There's also the multiracial Dubois family; Tom Dubois is a successful black lawyer married to a white woman (Sarah), whose moderate left-wing beliefs clash with Huey's radicalism. Jazmine Dubois is Tom's biracial daughter and Huey's only other friend, whose overwhelming naivete makes her believe everything she is told by adults.

Most of the comic strip's humor was very satirical and topical in nature. Aaron McGruder used the comic as a vehicle for his social views, covering a lot of then-current news events on African-Americans and the United States in general. His favorite subjects of mockery were annoying black celebrities and right-wing politicians (especially the George W. Bush administration). Unsurprisingly, this comic strip attracted a lot of controversy, but also a lot of popularity over the years.

In February 2019, approximately 13 years after the original comic series ended (and about 5 years after the (seemingly) final season of the TV series had aired), Aaron McGruder and Seung Eun Kim created some new comic strips

that were posted on Instagram by Charlamagne tha God, satirizing the current sociopolitical climate of the Donald Trump administration. These new comics were released just a few months ahead of a later announcement in June 2019 that the TV series would also be continued

Not to be confused with The Boondock Saints.