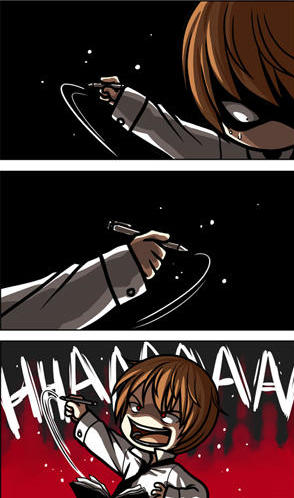 This is like sex for you, isn't it?
Image

When you think about it, the vast majority of things we do in our everyday life are incredibly boring. Sports games? A bunch of people throw a ball around. Lunch? You put food in your mouth and chew it. Sex? A couple of people rub their genitals together. Talk about dull.

In the world of fiction, however, this kind of mundanity simply will not do (unless you're such a good writer that you can pull it off). This is especially noticeable when plot-relevant events of ''huge importance" are going on! Looks like we need some editing work from Doctor Fabulous if this is gonna get anywhere. To an otherwise mundane scene, we will thus add

...And all of a sudden, we've got something exciting. Well, in theory anyway. Simply by reading this page, you've made it substantially more obvious to yourself when the film editor is just using these disclaimers to screw with your emotions, and indeed, overuse of these tone-changers will be obvious to nearly anyone. Of course, effective use of this trope will blind the viewer with sheer awesome to the point that they won't notice.

Large Hams are the living embodiments of this trope. This trope is highly likely to contain Melodrama. When this gets overdone, you often end up with Bathos (which becomes Narm if not done on purpose).

Compare Fence Painting when this technique is used by a character in-universe to draw people's attention to otherwise boring actions. See also Mundane Utility (for awesome tools that are used to do mundane things), Invisibility Flicker (which reminds you that stealth and awesome don't mix, except when ninjas are involved), Hair Flip (a common way of making a small head movement dramatic), and Mundane Object Amazement (more focused on characters being amazed by mundane objects). Contrast with Unusually Uninteresting Sight.

I'll take a trope page... and EDIT IT!!
Feedback

Lambs to the Cosmic Slaughter

Rick uses scientific precision to create truly level ground. The result is so life-changing for Morty that Rick had to erase his memory because he couldn't handle the "crooked" normal reality

Alternative Title(s): What Do You Mean Its Not Awesome, Mundane Tasks Made Epic, Mundane Events Made Awesome

Lambs to the Cosmic Slaughter

Rick uses scientific precision to create truly level ground. The result is so life-changing for Morty that Rick had to erase his memory because he couldn't handle the "crooked" normal reality