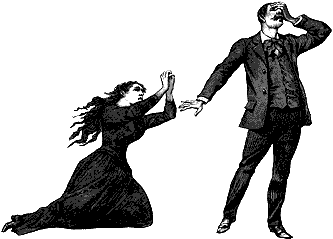 "Bob, darling, how will I ever live without you!?"
"Alice, alas, I cannot divorce myself from TV Tropes!"
"They (young actors) see TV movies. They see Lifetime movies. They think that's melodrama. They don't know the true fun of ever-escalating emotions building up to a volcanic pitch!"
— Quentin Tarantino on Douglas Sirk melodramas.
Advertisement:

A type of theater, film, and television that focuses on heightening the emotions of the audience. The word "melodrama" derives from "melody [in] drama" (like opera); melodrama at its finest aspires to have the tone and the repetitive, building emotion of an opera or a symphony.

It's usually associated with everyone acting like a Large Ham, but it's actually about specific emphasis on any dramatic situation. This is done by amping up the perceived scale and emotional response on everything. Basically, every little hurdle becomes a mountain, every setback a tragedy of Greek proportions, and the official couple will be Star-Crossed Lovers over the tiniest things, usually thanks to outside interference and Poor Communication Kills.

Note that this isn't the same as stage actors speaking loudly and making broad movements. That's just a necessity of stage acting. This is when the actors portray the characters (or the characters are written as) being akin to teenagers with a very small, Soap Opera scale world. Every success, kiss, and snub will carry the sting of a legendary story. Essentially, what to us would be a pinprick gains the pathos of a rending wound.

Also note that this can be done right. Melodrama can quite easily hook viewers into becoming emotionally invested in the characters, something every story needs to survive. It helps if the stories are the type that can produce large emotions — and if the characters are depicted with proper motivations. Only occasionally does it fall into the Anvilicious Narm-fests we associate with them. Which is why nowadays it's more of a pejorative term for gratuitous drama, and something writing books today urge people to steer clear of.

A Sub-Trope of Rule of Drama.

Tell about the sand

Anakin and Padme are troubled by their forbidden love.

Tell about the sand

Anakin and Padme are troubled by their forbidden love.