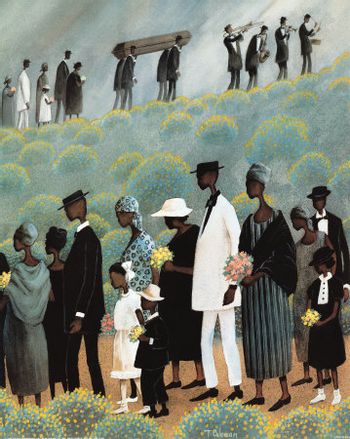 Charles Caryl Coleman - Funeral March
"Stop all the clocks, cut off the telephone,
Prevent the dog from barking with a juicy bone.
Silence the piano and, with muffled drum,
Bring out the coffin, let the mourners come."
— W. H. Auden, Funeral Blues
Advertisement:

So a well-liked character died and we don't feel like laughing. We need to find a way to cope with the loss.

Much like in real life, the cast assembles to bid farewell. Even cynical shows, and so much more the idealistic ones, make the characters emphasize their feeling of community. We get to see all the reactions, from crying over composure to quiet shock. We get to see the stylish cast in subdued clothes. We get to see a scenery shot from further away to show the mood - and who's still alive. The soundtrack gets quite creative and the weather will be fitting for the mood: Rainy and cloudy. Or there can be snow.

A speech, a song or a poem might be performed by one of the cast. It will praise the deceased, recall memories of him or her, emphasize the ideals they lived by and express the cast's (and with them the public's and maybe even writer's) sorrow. The scene ends on a very moving note that can be anything between hopeful, heartbroken and tragic-comic.

A well-made funeral scene can virtually sum up what the show is all about.

A funeral being Due to the Dead, arranging a Meaningful Funeral or attending with proper respect may be used to characterize good characters, and denying one or behaving disrespectfully at one likewise for evil characters.

A Reality Subtext can make the Meaningful Funeral even more meaningful (i.e., The Character Died with Him).

A less formal but similar situation is To Absent Friends. Indeed, characters may go from a Meaningful Funeral to To Absent Friends, although this can be hard to pull off as they revolve about the same emotions. Personal Effects Reveal also often dwells on the grief. When the funeral is not meant to be taken seriously, you've got The "Fun" in "Funeral".

This should go without saying, but as a Death Trope, all spoilers will be unmarked. You have been warned.