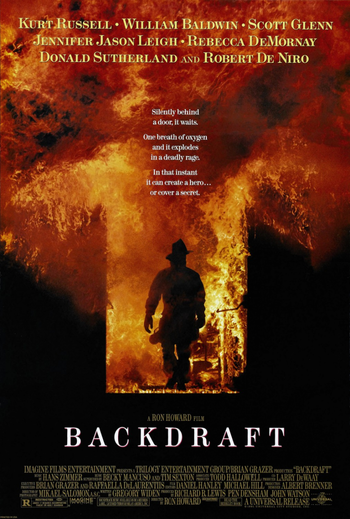 In The Windy City, young Brian McCaffery (Baldwin) is a man going from one dead-end job to another, until he gets it in his head to be a firefighter alongside his brother, Stephen "Bull" McCaffery (Russell), and the men of the Engine 17 crew. Brian's past precedes him; he was photographed at the scene of his firefighter father's death by arson, as he watched from the ground. Now, in the present day, another arsonist has killed two city officials, and after Brian is transferred to the investigative division of the Fire Department, it is up to him and arson investigator Donald "Shadow" Rimgale (De Niro) to sniff out the arsonist before anyone else is torched.

A Direct to Video sequel, Backdraft 2, was released on May 14, 2019, with William Baldwin and Donald Sutherland reprising their roles as Brian McCaffery and Ronald Bartel respectively.