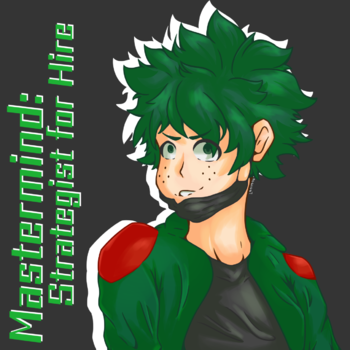 Izuku Midoriya never got the chance to save Bakugo from the sludge villain and impress All Might. With his dream crushed, Izuku becomes bitter and angry. It also doesn't help that he faces discrimination at every turn. All he ever wanted was to be appreciated, so when the villains are the ones to recognize his talents rather than the heroes, well, Izuku just can't resist. He might as well help those who actually want him around.

Mistakes were made, and now society must face a villain of their own making: Mastermind.

Mastermind: Strategist for Hire is a My Hero Academia fanfic by myheadinthecloudsnotcomingdown. It can be read on Archive of Our Own here

A sequel, Mastermind: Rise of Anarchy, was released on New Year's Eve 2020, and can also be read on Archive of Our Own here

Mastermind: Strategist for Hire contains examples of the following: