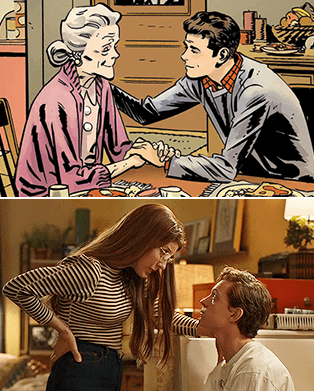 Above: Aunt May in the comics.
Below: Aunt May in Spider-Man: Homecoming.
"But we see our main innocent, and, of course, her dad too
This is Cindy Lou Who, who is no more than two...welve, but we'll give 'em a little leeway."
— The Nostalgia Critic, in his review of the 2000 version of How the Grinch Stole Christmas!
Advertisement:

In the process of adapting a work, many things don't translate very well into a different medium. An Age Lift is when the age of the character in question is changed or glossed over for the sake of the story. The idea is that the discrepancy between character and actor is much smaller, and in some cases, the exact age is not that important to the character. In some cases, this can simply be a case of the creators avoiding the embarrassing issue of a less than wholesome relationship, or wanting to give two characters more of a connection (not necessarily a friendly one; it can be used to emphasise a Foil) by making them contemporaries. Or maybe the creators just think the original age of the characters doesn't fit their target audience.

In live action, it can be a Pragmatic Adaptation to take into account factors such as child labour laws and how demanding a role may be for a younger actor. It is also likely to occur if something happens to the character within the source material which makes keeping them at their original age problematic even with Dawson Casting, but, because the event in question is essential to the plot, leaving it out isn't an option either. The two most common forms of this appear to be aging pre-teen characters to teenagers so twenty-somethings can feasibly play them and aging thirty-something parents by about a decade to counter the potential Values Dissonance relating to young parents.

Compare Artistic Age (where the appearance is more important than the number of years), Dawson Casting (which leaves the age of the character the same but casts an older actor for the part anyway), Playing Gertrude (which does likewise with younger actors), Hollywood Old (same), Underage Casting (same) and Younger and Hipper. Vague Age is when the viewers and often the creators don't really know exactly how old a character is, and it's a great excuse for why the show might make a specific claim that seems like a change to some previously established fact. Seeing as age brings experience with it, this might also cause an Adaptational Skill.

Three-Month-Old Newborn is a meta subtrope that results from the logistical issues of using actual newborns to play young babies.