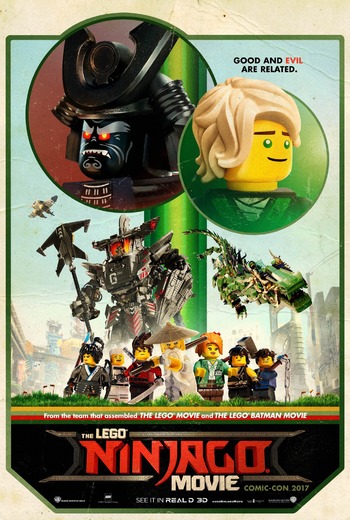 "Are you ready to risk your life... for Ninjago?"
Lloyd: You ruined my life!
Garmadon: Pfft, that's not true. I haven't even been a part of your life, how could I ruin it? I wasn't even there.
Advertisement:

The LEGO Ninjago Movie is a 2017 spin-off of Ninjago and The LEGO Movie.

Its story follows Lloyd Garmadon, an Ordinary High-School Student and secret Highly Visible Ninja who protects the land of Ninjago from the forces of darkness. Unfortunately for Lloyd, his father, Garmadon, is the Evil Overlord of said forces of darkness, and an all around clueless Jerkass, much to Lloyd's constant annoyance. Now Lloyd must attempt to pull his team of secret Ninja allies together to put a stop to Garmadon's constant invasions, and hopefully repair his relationship with his father along the way.

The film was released on September 22, 2017. Prior to the premiere, Master Wu starred in the short The Master, which preceded Storks (and re-appeared on home video releases of The LEGO Batman Movie).

Should be noted that while it shares the title with the TV series, the movie follows its own continuity. Likely so both newcomers and those unfamiliar with the series won't have to worry about continuity.

Tropes for The Master include:

Lloyd learns the story of how his parents first met.

Example of:
How Dad Met Mom

Lloyd learns the story of how his parents first met.