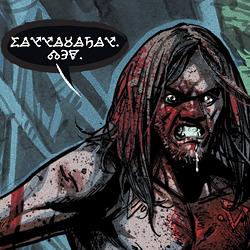 Took the words out of my mouth.
Advertisement:

An "alien language" is represented as English with a weird font for the letters instead of the Latin alphabet. Many examples in comic books, some in video games, a few in sci-fi movies and TV. Futurama and Star Wars are examples of the latter use. Since this requires a visual (and lends itself particularly well to comic books), it can be considered a form of Painting the Medium.

A specific subtrope of Fictionary and Cypher Language. Here

is a great site about this. Compare with Foreign-Looking Font. Contrast with Conlang.