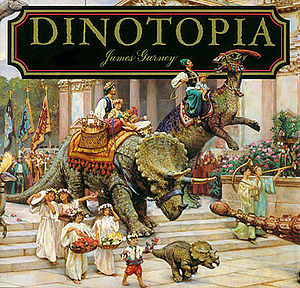 The tale of a mythical lost continent, on which resides an idealistic Utopian society ruled over jointly by dinosaurs and humans who have become marooned there over time. New arrivals are taught the ways of pacifism by the Dinotopians and are integrated into society.

A pair of young adult novels have been written for the series courtesy of Alan Dean Foster, along with a series of children's novels by various genre-fiction authors, a fourth Gurney-written/illustrated prequel that was packaged with a board game, a computer game, a miniseries, a short-lived television series based, in turn, upon the miniseries, a made-for-video animated film, and, inevitably, a few video games.

The Digest novels by various authors:

In its various forms, the series provides examples of: