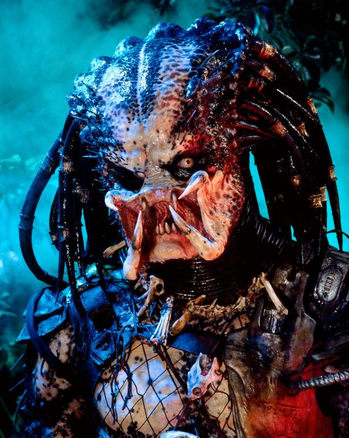 "When I was little, we found a man. He looked like — like, butchered. The old women in the village crossed themselves...and whispered crazy things, strange things. 'El Diablo cazador de hombres.' Only in the hottest years this happens. And this year, it grows hot. We began finding our men. We found them sometimes without their skins...and sometimes much, much worse. 'El que hace trofeos de los hombres' means 'the demon who makes trophies of men'."
— Anna, Predator
Advertisement:

Predator is a franchise of Action Horror films and comic books that detail individual encounters with an impossibly cool alien species with advanced technology, including a personal invisibility field. Although the human characters of the first two Predator films don't realize it, the creature likes to hunt aggressive members of other species for sport—and humans fit quite well in this category...

Since the inception in 1987, the Predator has appeared in a large number of movies, comics, novels, video games, and other media. Following an extremely successful comic crossover, many of these works pit the Predator against the Alien to the point that the two are forever linked in the public mind. This trend began in Predator 2, which included a xenomorph skull as an Easter Egg, and was eventually canonized in film. Beyond humans and xenomorphs, multiple comic series have established that the Predator's third favorite prey are superheroes (which rarely works out). The franchise has also inspired many a Predator Pastiche in other series.

GET TO THE CHOPPA!
Feedback