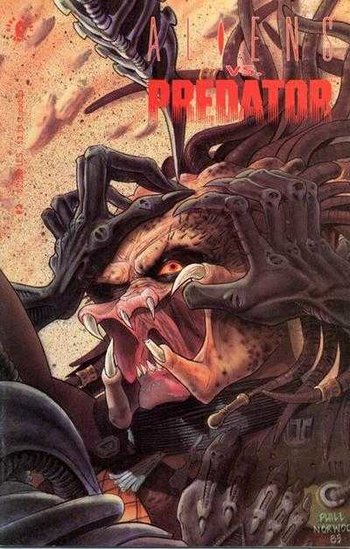 This is where it all started.

The original Aliens vs. Predator comic book miniseries by Dark Horse Comics. The idea came about when some Dark Horse comics creative types were sitting around, talking about other comics companies doing "versus" titles to boost sales, and started brainstorming their own "versus" title. Suggestions got increasingly ridiculous, before someone finally said "Alien versus Predator," and everyone looked at each other, shocked that it hadn't been the first thing they thought of. Not only was the pairing completely natural, but Dark Horse Comics already had the license to print comics for both the Alien franchise and the Predator franchise (at the time, only consisting of the original movie.) Fox licensing was all over the idea, a writer and artist was attached, and it was full-steam ahead.

The story is set nominally in the Aliens universe, with a far-flung future with space travel and distant human colonies, and a corrupt corporation overseeing almost everything. In this universe, the small planet Ryushi is just exiting its "first phase" of colonization, preparing to deliver their first roundup of rhynth (something like a cross between a cow and rhinoceros) to a Company freighter. Because the first phase is ending, the previous colony administrator is leaving, and a new boss, Machiko Noguchi, is taking over. She's initially cold and distant, trying to run the colony tight and by-the-book, but is finding her approach is not earning her respect from the rough-and-tumble colonists.

Meanwhile, a Predator ship is racing through space towards a hunt. On board, a captive Alien Queen lays eggs for the Predators to "seed" on their chosen worlds so they can hunt them some Aliens. A screening process prevents eggs which contain facehuggers with Queen larvae from entering the mix, but Queen isn't a fan of having her eggs incinerated right in front of her, and manages to push the screening drone off course. Thus, one of the facehuggers on this hunt will impregnate someone with a Queen. And of course, the world chosen for this hunt is the dry, hot, arid, desert world of Ryushi, the Predators either being unaware of or not caring that there will be humans around who might screw up their hunt.

It doesn't take long for things to go completely pear-shaped. The facehuggers infect the rhynth of one of the settlers' herds, and he covers up that his rhynth might be infected with something so he doesn't lose money on the roundup. The infected rhynth are loaded aboard the freighter Lecter, where the aliens hatch and get the two pilots. The freighter is docked in the middle of the colony, meaning the aliens can come barging out at any time to attack the colonists, and the Predators have to go through the humans to get to their prey. And the colony's doctor, intrigued by the facehugger the rancher's assistant gave him, heads to the totally wrong spot to look for them, encounters the Predators, and accidentally puts the hunt's leader in a coma, leaving a large group of effectively unruly teenage Predators on a world with humans and Aliens with no adult supervision. The colonists have to fight for their lives against the Aliens and the Predators, the Aliens have to try and fight off the Predators while attacking humans to build their hive, and the young, inexperienced, more-balls-than-brains Predators have to try and take on an entire Alien hive and some badly overwhelmed but extremely pissed-off human colonists.

This first story set the stage for all other Aliens vs. Predator stories to come, and is actually a pretty fine piece of comic book writing in and of itself. Several more comics series followed. The comic story itself was adapted into a novel by Steve Perry and Stephani Perry, entitled Aliens vs. Predator: Prey.