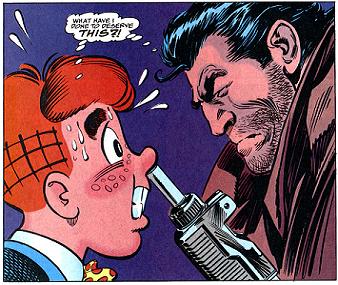 Yes, this really happened.
"The team-up you thought would never happen... Archie and the Punisher wish you were right!"
— Cover Blurb
Advertisement:

After dealing twice with DC Comics' Batman, the next logical Intercontinuity Crossover for Marvel Comics' no-nonsense vigilante The Punisher was for him to try to shoot that delightful neighborhood rapscallion Archie Andrews.

Frank Castle, the vigilante known as The Punisher, is working together with the FBI to bring the up-and-coming drug dealer known as Red Fever to justice. Red tries to evade him by going to idyllic Riverdale, where he tries to establish a new criminal enterprise. However, Punisher follows and stops him with the help of Red's lookalike Archie and his friends.

The premise started as a joke by Archie editor-in-chief Victor Gorelick when the company was trying to find an idea for its first Intercontinuity Crossover with a superhero publisher. Writer Batton Lash submitted a proposal showing how the idea could actually be done, and both Marvel and Archie decided it was just Crazy Enough to Work.

The Marvel-published edition of this book is titled The Punisher Meets Archie.