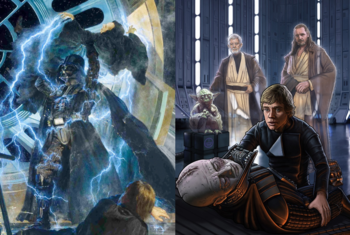 "Tell your sister... you were right."
"The problem with a 'redemption' gig is, well, no one wants to see it. They all want to believe in it, sure, but to do it... it's as good as signing your own death warrant. Audiences don't want to see you redeemed, living a normal life. They'll never truly forgive you for your flaws as long as you're alive."
— James Norrington, Roommates, "Redemption"
Advertisement:

Sometimes, when a character who has done something bad or evil sees the error of their ways and does a Heel–Face Turn in the course of fighting to undo the damage, their redemption comes at the cost of their own life.

There are any number of reasons that authors do this:

The Death Seeker and some types of the Martyr Without a Cause are characters most prone to believe this in-universe. A possible end result of the Redemption Quest.

Compare Villain's Dying Grace when the villain is portrayed sympathetically as they are dying, Death Equals Redemption for when a dying villain chooses to do a final good act and Alas, Poor Villain when the character's death (speech) provides a reason for the fans to feel sorry for them. See also Heel–Face Door-Slam, when the poor guy doesn't even get to redeem themself before dying. Non-protagonist atoners are especially likely to be hit by this trope. See Forgiveness Requires Death when death is the only way for a character to earn forgiveness for a crime.

Naturally, this is a Death Trope, so expect unmarked spoilers ahead. You Have Been Warned!

Viggo assures to Hiccup he has learnt to respect dragons as equals upon one saving his life and gives up his life to ensure Hiccup escapes.

Viggo assures to Hiccup he has learnt to respect dragons as equals upon one saving his life and gives up his life to ensure Hiccup escapes.