Roleplay / Survival of the Fittest 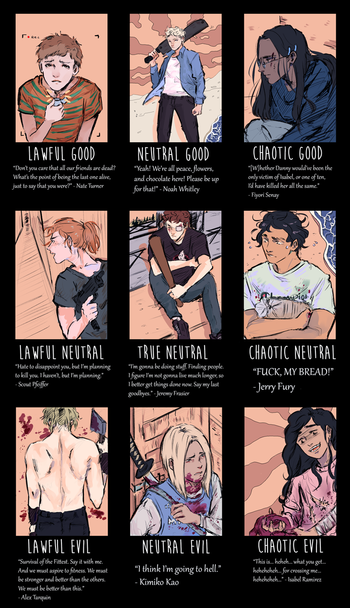 .
"You see now what friendship is worth. This is the reality of our game. It's one thing to let a buddy copy your math homework, but quite another to trust him with your life."
— Danya, V6 Prologue

Survival of the Fittest is a roleplaying board based on Battle Royale, which began in June 2005.

The premise is simple: a class of high-school students are abducted on the way to their end-of-year trip, fitted with collars, given randomly distributed weapons and are dropped onto an unknown island to fight their former peers until one remains alive. What ensues is drama, action, comedy, and most important, tragedy all rolled into a single RP. Gradually, over each "season", more and more secrets are revealed behind Danya and the terrorist organization which has managed to keep this twisted act running for over ten years.

The roleplay is geared primarily towards intermediate-advanced level writers. However, SOTF is open for anyone to join - although there is a member approval process in place, as well as a rigorous character acceptance system.

Version 7 has concluded with an epilogue to come. Meanwhile, the pregame for Version 8 has begun.

SOTF can be found here

. The wiki can be found here

, known as SOTF Mini, geared towards faster games and newer writers, as well as being the site for 'official' larger-scale Alternate Universe RPs. TV3 and International V1 are both approaching their endgames, with Supers beginning in early January 2022.

For reference, those RPing characters are called 'handlers' on the board, so if you see SotF examples using the word, this is what is meant by it.

If you thought this page was about the slogan used to summarise the theory of evolution and later appropriated by people who consider themselves fit, you're looking for The Social Darwinist.

This roleplay provides examples of the following: